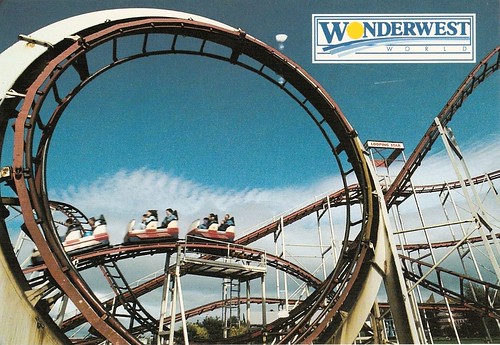 Do you remember your very first rollercoaster?

I do, and it was the Looping Star Rollercoaster, which used to live at Wonderweest World, what was a Butlins site in Ayr.

As a child, I had been to Wonwerwest World a few times on holidays with my sister and mum and I always so remember going on the rollercoaster, something of which I nicknamed as a young boy the ‘Oh No Weeeee’.

The rollercoaster itself only had the 1 loop but was an enjoyable ride even for a young boy.

Sadly, Haven took over the Butlins site to become Craig Tara, the rides were all removed then removed in 1998, to make space for… Caravans!

The Rollercoaster has then moved onto other places so you never know, you may have actually managed to experience this rollercoaster yourself.

Now of course, Butlins did have a number of other rides available to experience, including a small train ride, which as a young boy I loved!

Along with this there was a few land-based rides as well and it always had a great choice and was such a shame when Haven took-over that all of the rides were removed.

Winter Wonderland at Hyde Park for 2021?

Already wish that the 2022 Season is here, miss my

Time for food with style

Munchen Looping so fun managed to get a back row r

Not much updates to give you all at the moment, we are looking forward to Thorpe Park re-opening at the end of March. Currently, we are working on plans for a visit so watch this space!

Project Exodus confirmed as we all speculated after seeing it in Traillers, BUT X No Way Out also mentioned in the plans! I guess this will be the end for the Walking Dead IP which isn't a supprise?